I'm the Daughter of an AMERICANA-phile!

....if there is such a description of a person.

My Mom was the ultimate collector of Americana and especially anything celebrating our American Flag or heroes. Has any of her traits rubbed off?---well yes, and no, because I have totes of plates, figurines, glassware, and coins---celebrating the bi-centennial, state centennials, presidents, wanna-be presidents, and pretty much anything commemorating our American Heritage.

I learned my history lessons from Staffordshire plates such as these from the dining room hutch of my childhood home.


Spirit of 76, iconic portrait of the American revolution. Center piece for this plate is Spirit of ‘76 painting by Archibald Willard. This painting, which was originally known as Yankee Doodle, centers around America’s Revolutionary War victory and was among the featured works that were on display at the Centennial International Exhibition of 1876 in Philadelphia.

Faneuil Hall, Hall is the center print of this historical plate, no.1 in the series of the Ye Olde Historical Plates.
This one is marked British Anchor Potteries with anchor mark in green as well as Staffordshire England R no. 553308. Anchor was the pottery mark for Rowland and Marcellus and used to export to America -R&M was in business from 1893-1937.

Our Capitol building in Washington D.C. with Martha and George at Mt Vernon in one of the side pictures.
Plate in Flow-blue transfer printed on earthenware, this is a wonderful plate with the Capitol Building in the center. Side panels have the Executive Mansion(White House), Congressional Library and the old State War and Navy Department building on it.

Mom had over twenty of these flow-blue historical plates depicting scenes in history or places. I was probably the only student who knew that DeSoto discovered the Mississippi or at least claimed it for Spain before we even started our American history classes.

I have boxes of postcards, ephemera, and other memorabilia. My mom and dad had a 1853 farmhouse/cottage which my mom filled with red/white/blue Americana memorabilia. We had horns, eagles, muskets, and bunting everywhere-even drum light fixtures. When the 1976 Bi-Centennial came...she went into hyper-drive in buying, just about everything.

I think I have at least ten bicentennial plates by different makers.

A Bi-Centennial plate from Avon, I think.

You may remember those slant-eyed Presidential plates made overseas...I have totes of those. Mom was convinced generations in the future would be dying for a (Chinese) version of Reagan, Ford, Carter---etc., on a plate or two, or three, or four. She tried to corner the market and I have them all-in multiples---different views---with wives without...sigh.

She treasured many items for Lincoln and JFK. A glass commenting JFK's death?or his presidential years.

An etching from a 1901 calendar of Lincoln (probably in honor of 50 years after Lincoln's death.)

How about Lincoln Douglas debates. This plate has a lot of color and energy. Issue number on back is 4059A. Third in the series, "Lincoln-Man of America Series" Made by the Knowles China Company, 1987.

Then there is war memorabilia.

Another unusual plate in a similar series of Commanders of our armed forces in WWII.

Large ceramic commerative plate for WWII with allies flags and Admiral Leahy in the center. Nice gold trim  and plate in v.good to excellent condition. Back of the plate has Allied Nations Commerative Series, Exclusively by Salem China Co., Salem, Ohio, Made in U.S.A.

Some references indicate this series (there are many) was made during the war, 1943-5.
These are at least valid collector's items, though how many generals/admirals can you have scowling on your walls. Mom had four that I have found so far.


Eagles and flags were also her favorites. This is a Royal Copenhagen or Bing and Grondahl Bi-Centennial plate for the USA.

Then there were the inexpensive plates commemorating just about anything, here the Flag, Sesquicentennial (1964-150years)

We basically have a real Old Glory on a flag pole. My porch for the season has a flag banner, all hand pieced and stitched, $5.99 from a thrift store.


The shell pedestal, makes me think of "Sea to shining Sea."

One of my mom's Striking Bi-Centennial plates on the table. Faux geraniums, as ours are just beginning to bloom.


The flag banner background is washed out denim, the quilting on the edges is a rope design. Beautiful workmanship on this piece. I love it. My mom would be proud.

How do you celebrate? After living with so much Americana, we are pretty low key here.


I can always switch out the runner and add strawberries for a summer. 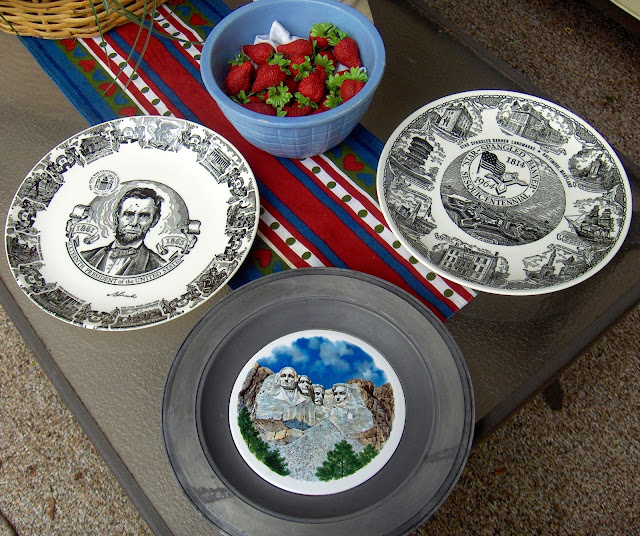 Or change out a plate or two or three or four....Mt.Rushmore ceramic insert in pewter.

This Avon one is quite pretty though and echoes the navy in the banner.

I had wanted to cover some pillows in bandana material---but haven't found red or red material right now. So that will have to wait.


I wonder if they would be pleased to have their faces on a mountain or a plate? Theodore Roosevelt  would be saying...'deface a mountain, by Golly not on my watch!' (as founder of our National Park System.)


Thanks always for stopping by, and I will be happy to answer any comments, and questions if I can.


All the opinions and photographs in this blog are my own unless indicated. I have not been paid or reimbursed in anyway for my opinions or posts. Please do not use photos without linking back to this blog. Thank you for your cooperation, Sandi Magle

I'll be sharing at these fine parties:
Amaze Me Monday
Inspire Me Tuesday
Metamorphisis Monday