England/Blue and White Treasures
and pottery lovers, buckle up!
I haven't done any Junking/Antique posts for quite awhile. Between 2019 being sidelined with my knee from May-January, and then Covid in 2020, my junking expeditions have been few and far between.
Decorating options for 2019 -2020 were limited. With our basement torn apart, I had no idea where any of my everyday pieces were. I found two totes with some of my favorite blue and white pieces for the kitchen this week.  I realized I had never shared some of these pieces and where/what they were. I'm starting with the English pottery pieces. Some very old, others not so much.
I don't remember how long (40 years???) I've had this piece...but it is gorgeous.
Wild guess in age?
This is the enhanced mark. Basically the only thing you can read is England in the lower part of the circle. It is a more earthenware clay than porcelain. The pattern name above in orangish and barely readable. After squinting at this long enough, I figured out it is Royal Winton 1930-1950's from the mark.
The pattern name is Westminster. R Winton apparently made this for awhile, since I'm finding it with varying marks and colorations. Everything from black and red to all blue to a green. However, many potteries used these old designs from the 1700's for their patterns. Pretty much like we cut and paste things from the internet now.
I grabbed these 4 sweet salad/luncheon plates this year, because they were perfect, and we seem to go through a lot of luncheon plates. I use anything that is blue and white for my everyday dishes. I gave up long ago--maintaining full set of everyday dishes.
This is an easy find...Persian Tulip by JohnsonBros England probably from the 1950-60's. They can be pricey, I will save them for informal large family dinners, if we ever have any again.

I had two of these, this morning!

diamond shape was discontinued and “Rd. No.,”

followed by the number assigned to the ceramic, was

used." No information on this plate of maker

Dating by this mark number, 1909 before September

I've always loved these two---sadly after placing one

in the corner cabinet, on tape and a ridge of velcro---it

took a flying walk/run off the shelf, pushing a cup with

it and crashed to the floor. I was 4 feet away?

First time the two plates had been separated since I

bought them? I had just packed the other away with

This was an interesting piece, another one I have had for a long time.
Another prolific pottery, part of Mason's, this mark simply dates this 1891 or later. Pattern is delicate, and not over wrought. I like it, and it is porcelain, while  Ashworth ceramics usually were, ironstone, stoneware or earthenware. I had no luck nailing this glaze treatment or the exact pattern down.
I've grouped these as together as they are all scenic pieces. All from England, I use these for extra dinner plates, except for the Mayflower plate. 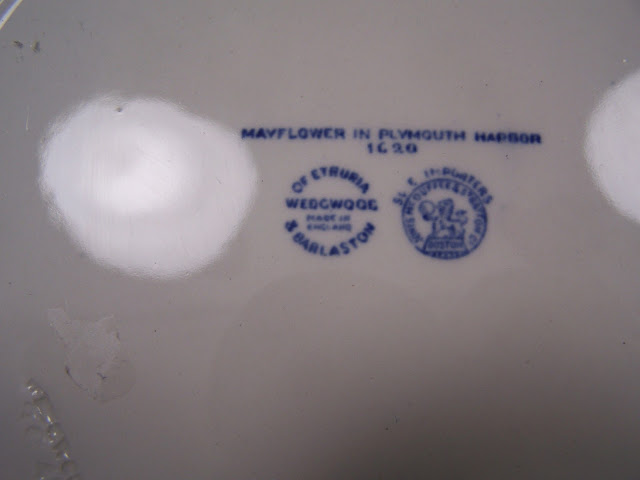 The mark on the right is Sole Importers, Jones Mc Duffee Stratton of Boston.
Below By Keith A. McLeod and James R. Boyle
"As near as we can estimate the 'system' went like this: an American business would express the wish to have a particular item or commemorative piece, Jones, McDuffee and Stratton, who employed artists would produce the artwork for the plate, for example, then send the order to Wedgwood, who would manufacture the ware, place Jones, McDuffee and Stratton's mark on the product and ship it to Boston to their warehouse on Farnsworth Street, which was connected to the Cunard White Star harbour facilities and to a rail spur. From the warehouse the china was sent across the United States and to Canada." from Alexis Antiques
This is a very interesting site, and will post it below also.
The JMS importers worked with Wedgwood for 75 years, to the mid 1950's.
Dating this particular plate to the late 1940s because of the impressed mark. 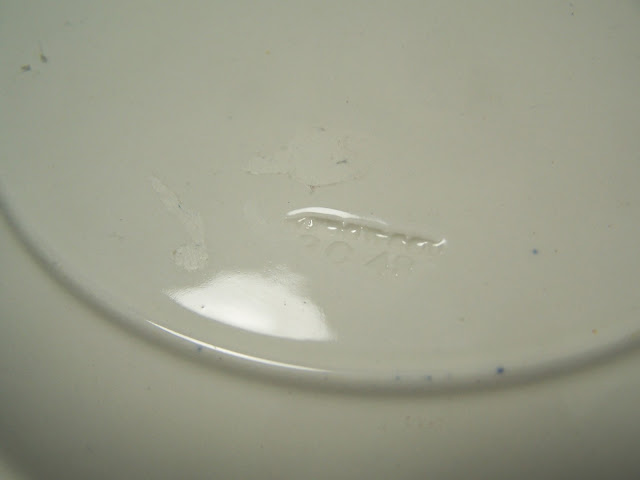 This says, WEDGWOOD
30      46 or 48  maybe 1948.
This is a pretty one...it's a Spode from their series Rural Scenes. These are reproductions and were released in groups or singles in the 1990's.
Clearly marked though---so you know you are getting a reproduction.
I picked up three of these for a pittance. They are Royal Stafford, which have in business since 1845. And, are still actually operating.
Listed as Coaching Scene, these are fairly recent, note dishwasher and microwave safe; always a give away, post 1970's.
Antique historical blue and white transfer ware patterns really sky-rocketed. My mom collected pieces and they literally got too high in price. Late 1970-80's many companies jumped on the reproduction bandwagon. These are lovely plates and
made in the 1980's.
Again the key is Dishwasher and Microwave safe...LOL.
Here is a selection of Spode Plates. Spode has released MANY MANY patterns and pieces in their Blue Room Collections. All clearly marked. Making decorators penchant for historic blue and white affordable. New, they are still a little pricey, but I've picked most of mine up at TJM, Homegoods and thrift shops.
I love this Milkmaid...so peaceful, showing life in 1814.
Again, clearly marked.
This is very traditional and from the 'Traditions' series.
Next such a rural scene...loving the border on this one.
Titled the Woodsman, from an 1816 engraving.
These are made so well. The serving pieces are well worth the extra dollars now, as they were limited issues.
Here is a real sleeper, I picked up for not even a song,
just a hummm!
This pattern is really lovely! This dinner plate has such a lovely floral rim and intricate pattern. Soft blues to the true cobalt.
Script marks are always a bit hard to decipher sometimes. This pattern is Genevese?  and the maker mark in the lower left is ?? and an A lower center word and China on the right. The 'made in country' is missing from  the transfer, did not make it totally on? To Etsy--looking up Genevese....Wow!
The word on the left is Opaque, and it's 19th century Minton! The lovely blue plate was made
between 1836-1841.
My last three are varied in style.
This lovely Ridgways plate has a gold leaf overlay on the design, clearly visible at 10 o'clock upper left. I've always had rusts in my home and now a rusty red, so I have picked up pieces with the orange up over the years.
Ridgway and Ridgways were at least 17  long-lived Stoke on Trent potteries, started in 1792. This piece is from the Bedford potteries and was made between 1891-1920.
I used http://www.thepotteries.org to figure this out. I'm sure the hand-lettered numbers would date this down further if I needed it. It's over 100 years old..that is fine.
This flow blue soup/serving bowl marked, Mark is impressed with /// Ashworth or EE or DB or BB dating this to 1862-1880.   This has a lovely clear glaze tinted with blue.
Early impressed Ashworth mark.
I found a few of these pieces, can you imagine an entire table being set with this. And, the serving pieces are gorgeous with huge platters. These were produced in England by the Staffordshire potter, G.L. Ashworth & Bros. Ashworth started his pottery in 1862 as part of Mason's and continued until 1890.
And the last photo for today, Botanical Beauties, also known as Giant Lily was produced by Elkin and Newbon of Stafford Street, Longton in Staffordshire sometime between 1844 and 1845.
This pottery was short lived, but gorgeous and highly collectible. Many serving pieces were made in several variations of this pattern. I hope you enjoyed all or some of my English Transfer ware plates, old and new.
Posted by Sandi Magle at 9:43 AM 21 comments: