Sunday October 8th through Tuesday, the 10th, 1871 over three square miles of the center of Chicago burned relentlessly.

A bustling metropolis and manufacturing city, as well as the transportation hub to the west, Chicago was still a boomtown of sorts. The Chicago River had been linked to the Illinois River and connected to the Mississippi River. This linked Chicago to most states via waterways in the Union.

Railroads criss-crossing the 'booming' country provided access to the East and all the way to the Pacific Ocean. Chicago was primed to be the greatest of American cities...and then She burned.

More than two-thousand acres burned of prime and not so prime Chicago land.
A dry summer and fall, wailing winds, overcrowded residential districts built of wood with wood fences and wooden walkways fed the flames of the fire that started in the south part of the city.

It quickly reached the Chicago River mouth reaching tornado like conditions feeding the flames. People fled in every direction, streets filled with fleeing victims as 'fire-proof' buildings crumbled behind them. Bridges clogged and quickly as the fire came from the West and the South riding howling winds.


Victims fled to the Lake Michigan beach, to boats and piers...with only the clothes on their backs, dragging animals and carrying children and the elderly in their arms.

Tuesday morning rain drizzled and then rained, but the fire had burned and then ran out of fuel to the north with fewer homes and walkways to feed on.

Only known loss of life was set at approximately 300. Many panicked survivors poured onto the Lincoln Park Beach and into the Lake. A cemetery on the lakefront housed many for days as they waited for everything around their oasis to cool.

The center of the city buildings were all of stone and brick and most were reduced to a baked powder. Some had been advertised as 'fire proof'. 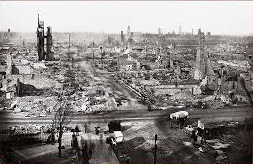 As far as the eye could see...nothing was recognizable.  Eventually the rubble was dumped into the lake to surround what had been the all the railroad's central depot. 100,000 of the residents of Chicago were homeless, and many more fled. Massive relief efforts were organized in cities across the nation and supplies shipped to Chicago to help. Winter was only 6-8 weeks away.

The only municipal building left standing was the 1868 Water Tower now located on North Michigan Avenue. Today it is the iconic symbol of Chicago's tenacity and a tribute to the CITY that rebuilt after the Great Chicago Fire.

All these photos are historic and all over the internet and Pinterest. So, I have chosen not to show a source as they are long out of copyright, except for the Water Tower photo!

I'm thankful for each and every comment, and will try and answer every question.

Join me at these fine blog parties:
Talk of the Town
Vintage Charm
Wonderful Wednesday


Please do not use photos without linking back to this blog without my permission.