Visiting with Granny in a 1940 Collier's

Last post was Junkin' in Grannys' Garage #2  and I promised I would share some more.
Down at the bottom of one of the four totes were these fab 1930-40's magazines.
While browsing last night, I realized that this is a window into our
grannys' pasts and the times in which they lived.

Today I'm going to share
Collier's June 1, 1940 just 6 months prior to WWII,
and the month my mom graduated from high school. 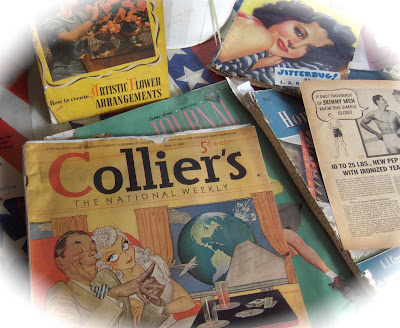 Notice the world in the background of the picture…a mature couple flying above the fray in an airplane, enjoying cocktails and cigarettes. The lady does not have a wedding ring on, the man's ring finger is discreetly hid.  They are off to do 'no good' by 1940 moral standards.
The artist, Robert O. Reid wasn't particularly subtle with this. Back to the globe---showing fireworks/explosions on the other side of the world from the U.S.. By June 1940, Europe had been at war since 1938. And the U.S.A had been outside of the fray. 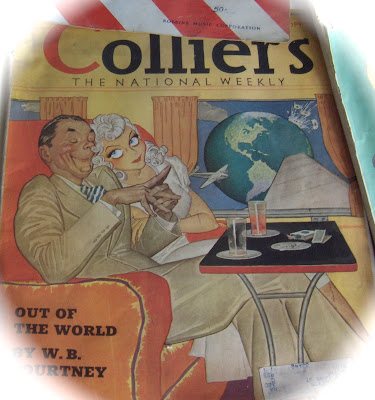 The article,  Out of the World, by W.B.Courtney explored flying over 30,000 feet above the earth in the 'stratosphere' on new Continental Airlines passenger planes.
I find it interesting that the cover artist and the editor, chose the subject matter they did to tie into the Continental Aircraft story, infidelity and impending war doom? 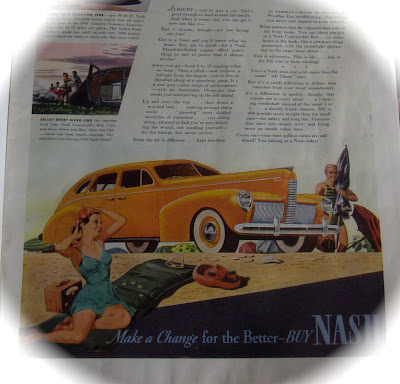 Full page color ads were the tops in this magazine. Here is a "Buy Nash" again for fun in the sun. I really can't imagine a tangerine orange Nash for they were huge cars.

Claiming to be a National News Weekly, Colliers had one short dismal article on the war. A story about the capture of Narvik, Norway a deep water port by the Germans.  The rest of the news was a few tidbits less than a 'Tweet' long on other stories from around the world, the extensive article on the Continental Aircraft, an article on car safety, and many short stories about this and that. 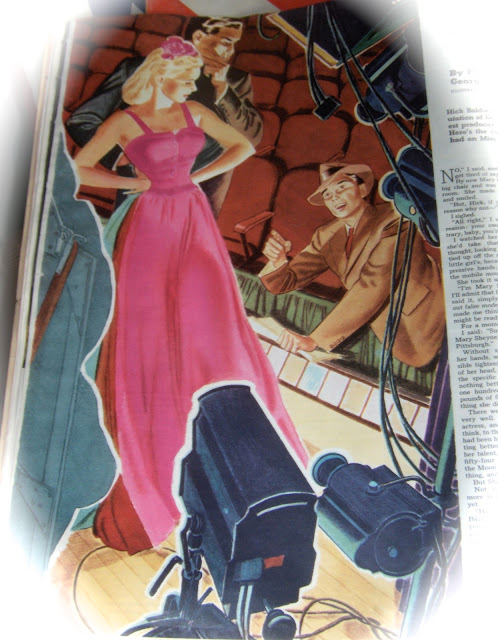 Some of the short stories were frivolous, have to love the artwork from a behind the scenes Hollywood film fiction story. The advertisements were very eye opening---aimed at both men and women.
Look what would have happened if International Motors had managed to capture the school bus market, RED SCHOOL BUSES???

Below on the right is the International Motors premium family car, I owned a 'Woody' like this for a short period of time. Back in the day, before affordable rental cars…you bought a junker for $100 while your car was being fixed. I needed a big wagon for hauling pottery to shows while my van was being fixed, so I had one of these for about 2 months…
it leaked gas and oil and was like driving a tank with no power steering.
I sold it immediately afterward, mostly because my arms were sore, LOL. 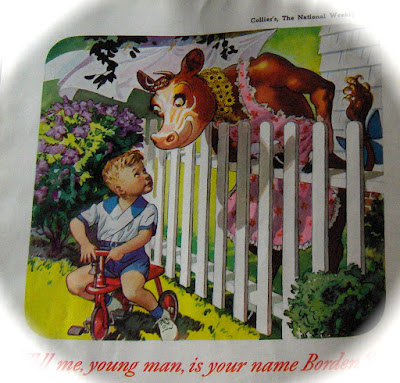 Here's a great ad with 'Elsie' the cow getting friendly with a little boy over the fence. Apparently 'Elsie' did wash on the side, while making milk for Borden's. 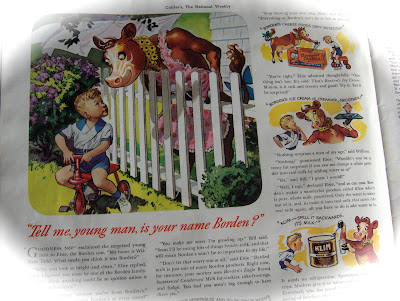 How many of you remember this? Klim on the lower right. According to the text, Klim- That's milk spelled backwards, or then known as canned milk.
Hmmm, that brand wasn't around in the 1950's that I can remember. 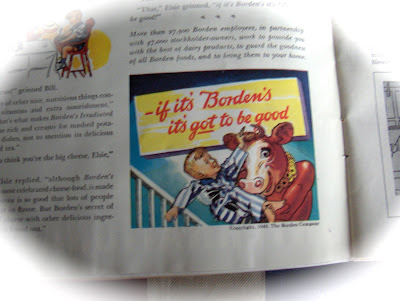 Borden's did use this slogan for years, "If it's Borden's, it's got to be good." 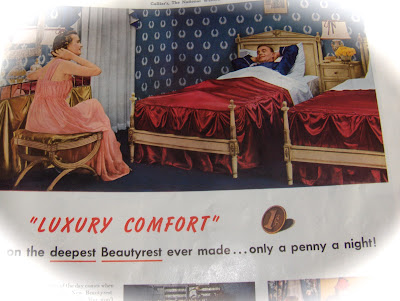 A mattress ad with the historic twin bed set-up, with people shown in the bedroom with at least one person with both feet on the floor. Those pesky censors, you know. Again, a name brand we still see, Beauty Rest. LOL, only a penny a night then and now $1000+ for a premium mattress
which is more like $$$ each night. 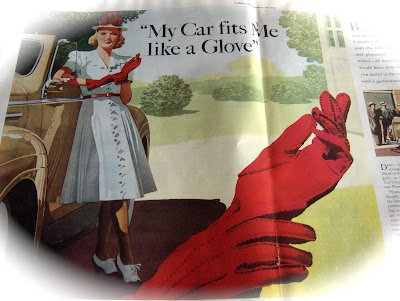 I thought this one was interesting for Chrysler. Clearly aimed at the female audience. Nicely done.
Love the red gloves, however she is a safe driver with the matronly shoes and button-secured frock. Can't have a 'driving' lady look anything but respectable.

Collier's demographic advertising leaned toward men, but occasionally toward women.

Surprisingly, these American Companies and their products are still around in one form or another. 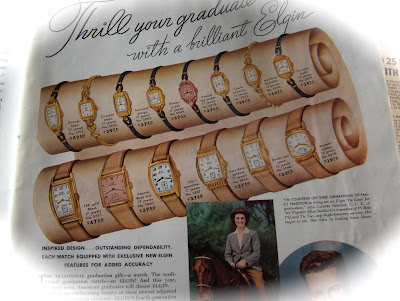 Lastly here is a ad, with prices for a whole line of Elgin watches for new graduates,
considered premium at the time and costing more than a week's wages for most people.
I think my mom had the 4th from the left on the top tier.

Hope you enjoyed a peek at this 1940s Collier's magazine.

And as always, thanks for stopping by and any comments,

All the opinions and photographs in this blog are my own, I have not been paid or reimbursed in anyway for my opinions or posts. Please do not use photos without linking back to this blog without my permission. Thank you for your cooperation, Sandi Magle